Recently it was reported that Facebook had a vulnerability which allowed you to send an executable file via Facebook messaging.

Vulnerability? Maybe more just a bad security practice or some error in the way it checked attachments. But since you do not need to be friends with someone in order to send them a message (unless you beef up your security settings) the risk increases. The researchers captured the traffic being sent to Facebook when they tried sending an attachment and figured out that Facebook seemed to only reject attachments based solely on looking at their file extensions – hence by simply doing something such as adding a space after the file’s extension it would bypass the attachment check. For instance:


Facebook downplayed this finding but later seemed to silently fix the issue. If you look at their official statement you’ll notice they stated “…we are not going to rely solely on string matching as a protective measure, since zip files and other things could also have unpredictable behaviors when sent as an attachment. We are AV scanning everything that comes through as a secondary measure, so we have defense in depth for this sort of vector. “ (more on that later)

The researchers who brought this to attention add to the recent waves of public disclosure showing there’s a trend amongst large companies putting security second. Is it absolutely necessary to send attachments via Facebook or is it just a bloated feature which will do more harm than good? Will most users tamper with the HTTP POST and alter the data being sent to trick a user? Not your everyday user, but for a pentest/red team/nation states of course. It doesn’t matter anyway because Facebook fixed it and we are all safe, right?

I figured I should first start out by verifying that we can’t simply modify the HTTP POST content as previously disclosed.

I was curious to see if I could simply alter the ‘Content-Type’ field so I uploaded a legitimate .txt file and observed facebook marks it as :

The part of the request that I changed is highlighted below:

Did it work? Nope…

Alright… so maybe Facebook is doing another check on the backend to verify that the file extension, content type and file header (if available) match. Well I’m a nosey/curious person so let’s test it out.

Have you ever heard of Right-to-Left-Override (RTLO)? RTLO is Unicode character (U+202E) and exists to support languages which are written from right to left such as Arabic and Hebrew. While RTLO is among the most commonly known there are similar characters such as the Left-to-Right-Overide (LTRO) Unicode character which is what I’ll use in the following example. Most people are still unaware of such characters but using them is a technique that’s been observed with malware in order to depict a false sense of what the file actually is.

I happened to be on Backtrackv5 when I did this but there’s nothing prohibiting you from doing it on another platform/distro. Since Backtrack didn’t seem to have a character map I had to install one: 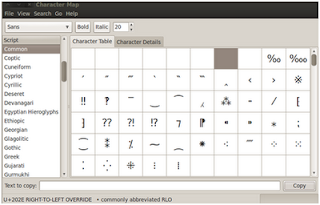 Since Facebook stated they use A/V to scan the attachments I thought I’d try to incorporate a file format exploit instead of a standalone EXE (make it a little more work on their end). Within Backtrack I loaded up Metasploit and created a payload the following way:


And chose the following options:
* Default location to save to is /root/pentest/exploits/set/src/program_junk

I proceeded to rename to the following file name format ‘alexe(LTRO).txt’
The renamed file within BackTrack explorer view:

The renamed file within a Windows 7 explorer view:

Prior to testing this file within Facebook I wanted to get some basic information on it:

What can we take away from this?

Now for the skeptics who are wondering if the contents of the file were modified during transit – the answer is no. It doesn’t appear as though anything was changed or stripped from this file:

MD5 of the file once downloaded from the victim’s Facebook which matches its MD5 hash prior to sending:

Header of the file once the victim downloaded it:

It’s understandable for a company like Facebook to say solely sending a file isn’t what leads to a compromise – there’s some social engineering and user interaction which must take place. However, they’re not helping…. and when someone says they’ve fixed something, don’t always believe them until you can verify it for yourself.

To clear a few things up – this was meant as a PoC that you could still attach an executable file to a Facebook message and try to see what types of checks/scanning of attachments Facebook was actually doing. Since the particular example I showed alters the file type, the file _should_ execute with the default application to handle that file extension (i.e. since Windows thinks it’s a Text Document, notepad or whatever is set for that file extension on the target system will try opening the file.). With that being said, I don’t believe this to downgrade its potential but just something to note. The previous researchers showed adding a space to the end of the EXE and sending the file – what is unknown is when that file is downloaded by the victim how the file name appears. Based on what I observed, it should be intact and if that’s the case then Windows shouldn’t recognize what type of file it is because it has an unknown/invalid file extension which means it too wouldn’t execute right away either without having its name modified.

There are other possibilities that weren’t tried such as just doing a RTLO and changing the icon/resource section of the EXE. By doing this, it would still appear as an application but again look like something else but the only difference is how the system would handle that particular file type.
Posted by Unknown at 4:06 PM