CAPTCHA service providers validate millions of CAPTCHAs each day and protect thousands of websites against the bots. A secure CAPTCHA generation and validation ecosystem forms the basis of the mutual trust model between the CAPTCHA provider and the consumer. A variety of damage can occur if any component of this ecosystem is compromised.

During Analysis of the CAPTCHA integration libraries provided by several CAPTCHA providers (including reCAPTCHA) revealed that almost all of the CAPTCHA verification API’s relied on plain text HTTP protocol to perform CAPTCHA validation. Because of this, the CAPTCHA provider’s identity was not validated, message authentication checks were not performed and the entire CAPTCHA validation was performed on an unencrypted channel. This vulnerability was also reported to reCAPTCHA team several months back.

If you decompile the .NET Plugin, you'll be able to pull out reCAPTCHA's verification URL, which demonstrates the absense of HTTPS:

In the current scenario, two types of attacks can be launched against vulnerable CAPTCHA implementations. These attacks are based on the assumption that an attacker is able to intercept the CAPTCHA validation traffic between target website and the CAPTCHA provider.

The following image describes what I call the "CAPTCHA Clipping Attack". Notice that steps 5 and 6 in blue would be the normal operation of events. We'll go into the attack in a little more detail below. 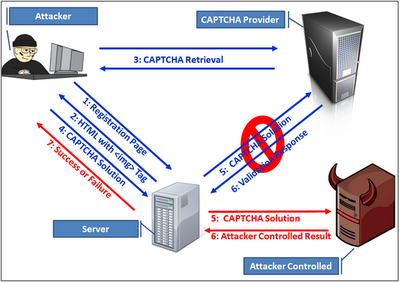 To exploit this vulnerability an attacker performs the following:

clipcaptcha is a proof of concept exploitation tool that specifically targets the vulnerabilities discussed above and allows complete bypass of CAPTCHA provider protection. clipcaptcha is built on the sslstrip codebase and has the following features:

clipcaptcha can be downloaded here:

Want more info? We'll have a new whitepaper about the attack in Foundstone's whitepaper section soon!