Comcast and DOCSIS 3.0 - Worth the upgrade?

There doesn't seem to be a whole lot of useful information about Comcast's DOCSIS v3.0 upgrade available on the web, so I figured I would post my findings. About a month back I received a letter from Comcast saying that they have upgraded their “Blast Internet service” in my area and that their records showed that I was still on a DOCSIS 2.0 modem. They were advising me to purchase a DOCSIS 3.0 modem and I wondered if it would even be worth the upgrade. This article will explain the results.

Armed with this letter’s vague claim to upgrade, I went to the Internet to look for others who received the same letter, but I found nothing. I even went to Comcast’s website to find empirical evidence - that was met with more unsubstantiated claims of increased speeds and the benefits of DOCSIS 3.0. You will find wording such as:

Upgrade your speed
DOCSIS 3.0 is the next generation of DOCSIS (Data Over Cable Services Interface Specification), an international telecommunications standard that lets cable television operators add high-speed and telephony data to their current cable TV systems.

With DOCSIS 3.0, you’ll experience significantly faster speeds, so you can make the most of your online experience. DOCSIS 3.0 also opens the door to new Internet technologies.

Upgrade your equipment
To take advantage of DOCSIS 3.0, you need a DOCSIS 3.0 modem. DOCSIS 2.0 modems will still work with our speed tiers (except for Blast and Extreme 50), but you won’t experience the blistering fast speeds now available. We also recommend upgrading to an 802.11n wireless router; 802.11g routers only support up to 20 Mbps. If you lease your modem, router, or gateway device from us, we’ll upgrade it at no extra charge.

If you already have a DOCSIS 3.0 modem, you may need to power cycle it to take advantage of our new, faster speeds.

So what is an inquisitive nerd to do? -- Why, contact the expert technicians course! I asked multiple employees questions such as the following:


However, to my frustration, no one could answer these questions. To understand the answer, you should understand a little bit about the difference in technology.

The major difference between DOCSIS 1.X/2.0 vs. 3.0 that concerns the average person is the fact that DOCSIS 3.0 supports channel bonding. Channel bonding means combining multiple downstream and upstream channels to support greater speeds. The maximum usable downstream throughput on a single channel is 38 Mbit/s (EuroDOCSIS is 50Mbit/s). Since a DOCSIS 2.0 modem only supports a single channel up and down, 38 Mbit/s is the theoretical downstream max. Thus, if the cable provider rolls out a 50 Mbit/s service (such as Comcast’s Blast 50), you will most likely not see the entire speed increase.

So the big question is… Is Comcast channel bonding? Unfortunately, no one on the help chat or first level phone support could answer the question. It was not until I called upon an inside person did I get the answer I was seeking. The answer is YES! (In my area) Now, off to buy a modem… but which one? 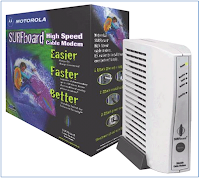 Personally, I am a huge fan of Motorola Cable modems because they just seem to work. I go all the way back to the DOCSIS 1.0 Motorola SB4100 (remember the hideous grey thing that came in a box with the gnarly surfer on it?) It just worked. 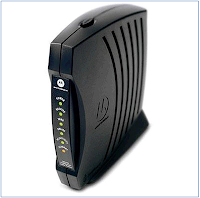 Then to my current DOCSIS 2.0 Motorola SB5120. So familiar to many of us—you probably own one or owned one at some point. It just worked too.

So, what model do we buy now? After doing a ton of research, I narrowed it down to two models:

“It harnesses the power of DOCSIS 3.0 technology to bond up to four downstream channels and four upstream channels--providing you advanced multimedia services with data rates of more than 100 Mbps in each direction. That makes gaming, shopping, downloading, working, high-quality voice and video conferencing, and peer-to-peer networking applications far more realistic, faster, and efficient than ever before.”

This one sounds even better!

“The SB6180 is the ideal competitive solution for the high-end residential user, the small home office owner, as well as for the medium-to-large business enterprise. Utilizing the power of DOCSIS® 3.0, the SB6180 enables channel bonding of up to 8 downstream channels and 4 upstream channels, which allows an operator to offer their customers advanced multimedia services with data rates of well over 300 Mbps in DOCSIS mode and 400 Mbps in EuroDOCSIS mode for downstream and 120 Mbps upstream.”

So, if you didn’t see the bolded difference, the SB6180 is a “future proofing” device that was originally marketed for small home office and business use. Ironically, you can also find it cheaper than the SB6121 on Amazon.

Here is a helpful chart from Wikipedia to understand the real numbers difference between 8 and 4 channel bonding:

But why? - Comcast has a “Device Compatibility and Capability” page that lists the modems that work with their network. Unfortunately, the SB6180 is not listed anywhere on their site. Additionally, after asking no less than three Comcast techs, all of them said that the SB6180 would NOT work on their network—thus I did not take the chance. Although, the inner nerd in me is mad that I didn’t try it.

If you are not one for reading the documentation that accompanies purchases, shame on you—I don’t always read them either. However, the documentation with the SB6121 was very clear and useful. So useful, I scanned it into the computer for you. What you should notice is that if the downstream or upstream light turns blue, your cable provider is channel bonding. If either light is green, that channel is a single channel. 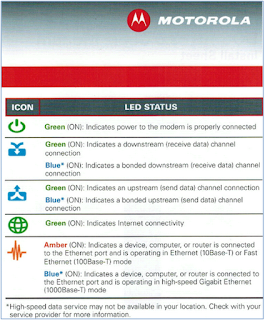 Having read this, I mumbled to myself… Those lights better be blue! 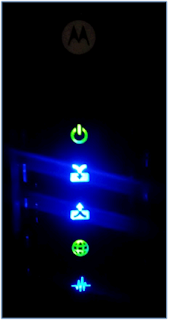 And they were! Whew! (Sorry to those who are blue/green color blind, you will have to take my word for it that upstream and downstream are blue)

Let’s see what those blue lights buy us… 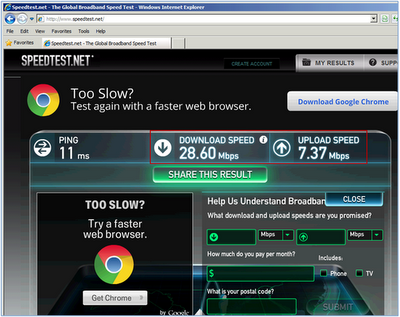 Now for the moment I had anxiously been waiting for… the new modem test! At first I was getting the same speeds... Uhh What?? Then I reset the modem a couple of times and then finally--MOAR POWA! 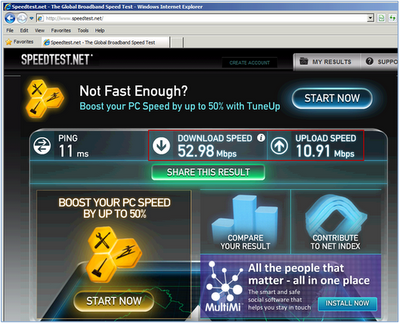 Overall, I am happy with the modem upgrade as it does provide a significant speed increase. I am also happy with Comcast for the free speed increase and letting me know that my cable modem should be upgraded. However, I am disappointed in the lack of support or at the very least the technical knowledge pertaining to the SB6180 (supporting the 8 channel bonded downstream instead of 4). Additionally, I feel that companies could provide graphics or case studies such as the one provided here illustrating why people should upgrade their modems and the potential difference they could see.

Hopefully this article has helped someone else make the decision to upgrade their modem. If anyone has the SB6180 working on Comcast’s network, I would be interested to know. Maybe if enough people have this modem working on their network, they will update their compatibility page.