Getting Started with WinDBG - Part 3

In this series of blog posts we've walked you through getting WinDBG installed, setup, and got you started by attaching to a process and setting breakpoints. Our next step is the actual debugging part where we're stepping through a program and looking at memory.

Really the whole reason you're using a debugger is to inspect the state of a process during a specific operation or function. Just about every instruction that gets executed alters the program state in some way which means having the ability to execute an instruction then inspect the state is extremely important. The first part of this is "stepping" - executing instructions then pausing. WinDBG offers a number of different stepping commands depending on where you are in the program and where you want to go.

Most debuggers use the following terms that describe how you can navigate through a program and its functions:


A note to make here is that both Step-Into and Step-Over will execute a single instruction and pause - behavior only changes when a call instruction is reached.

g is straightforward to use:

While the program is running, WinDBG will give you a message in the command input box:

If you know the address you'd like to execute until then just provide it as an argument to g:

Executing a single instruction, then pausing is called Single Stepping. This can be achieved by either using the "Step-Into" or "Step-Over" commands since both behave the same on non-call instructions. Rather then show them both here, let's look at these commands individually.

To Step-Into with WinDBG, use the t (Trace) command. Each step will show you the state of the registers and the instructions that will be executed. In this example we'll pause at the program's entry point (notepad!WinMainCRTStartup) and look at the first few instructions to be executed (u eip). The first instruction is a call to the notepad!__security_init_cookie function. Let's see how debugger behaves when Stepping-Into with t:

Here we can see that we were running within notepad!WinMainCRTStartup, then on the call we used t to follow the call into the notepad!__security_init_cookie function, where we paused on the first instruction.

WinDBG uses the p command to step over a function call. This means that the call and all subinstructions within the called function will be executed and the program will pause on the next instruction within the current function (e.g. notepad!WinMainCRTStartup). Let's look at the same scenario, but this time we'll use p:

Stepping-Out with WinDBG can be achieved with the gu (Go Up) command. This command scans the current function for a ret then pauses after it gets executed. This an important behavior, because if, for whatever reason, the function doesn't end in a ret or a code path doesn't lead to one, you could experience unexpected results with gu. Let's see what it looks like:

gu is good and all, but sometimes you want to look at the stack right before the function returns, in this scenario, you'll need to use either tt (Trace to Next Return) or pt. Both are easy to call:

The important thing here to remember is that tt will stop at the next return, even if its not in the current function. For instance, consider the following pseudocode, our goal is to pause on the ret in func:

In this example, if pause at call somefunc, then use tt, we'll end up pausing at the ret in someotherfunc.

A better approach for this scenario might be to use pt: Using the same pseudocode, if we pause at call somefunc, then use pt, we'd execute all the code in somefunc (and subsequently someotherfunc), then pause at the ret in func. In all reality for this example we could just use p, but that doesn't illustrate the point :)

Ultimately it depends on what you, as the person using the debugger, want to do.

Now we can finally get into the most important part of debugging: Inspecting Memory. WinDBG provides the d (Display Memory) command for this purpose. In its most simple form you can run it like this:

But this is more or less useless. Running d by itself for the first time will output the memory where eip points to. This is useless because eip should be pointing to a code segment and, to make sense of that, you'd really need to use the u (Unassemble) command. So a much better starting out command would be:

This will show us the values on the stack. With d, WinDBG will display data using the format specified by the last d command executed. If this is you're first time running d, it doesn't have previous command stored, so WinDBG will give you the output of the db (Display Byte) command.

db will output the data in bytes and provide the corresponding ASCII values:

Words, or 2 byte values, can be shown with dw (Display Word). Alternatively, you can use dW to show Words and ASCII values:

My favorite memory viewing command is dd (Display DWORDs). A DWORD is a double word, so 4 bytes. dd will just show you the DWORDS while dc will show DWORDs and ASCII values:

To display quadwords (4 words/8 bytes) within WinDBG, use dq:

You can even show binary with dyb:

So far we've just been looking at the memory that esp is pointing to by using esp as the parameter to our memory inspection comman however there are a number of different ways to reference memory that can be useful when starting out.

Registers - As we've seen, you can use any register and WinDBG will use the address in that register as the memory address:

Memory Address - You can also just use the memory address itself by providing it:

Offsets - You can also use offsets with registers or memory addresses by using mathematical expressions:

These expressions can be used wherever an address can be used. Here's what it looks like in WinDBG: 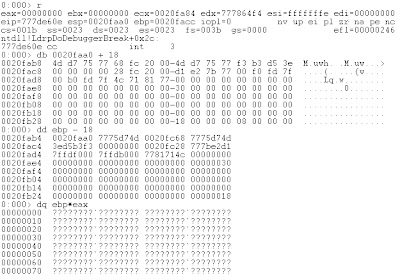 There are often times where a value on the stack is just a pointer to another location. If you'd like to look at that value you'd need to do two look ups. For instance, say we know that value ebp+4 is a pointer to some assembly code that we want to read. To view that assembly, we'd need two commands. The first command shows us the memory address at ebp+4:

Then the second requires us to manually copy the value at that address then paste it in as an argument to the u command so we can view that assembly:

This is all fine, but there's an easier way with the poi() function. Using poi() we just provide ebp+4 as its parameter and it will automatically take the value at that address and use it, rather then just using the value of ebp+4:

By default WinDBG will output a set amount of data, however we can limit how of that data is outputted with the L (Size Range Specifier) attribute. L will work with most commands and just needs to be appended to the end with a value:

That's really it to get you off the ground inspecting memory - I know, three blog posts building up to this functionality, and its just this tiny little section? Yup - there are some more memory inspection commands, but to get started, d is the core command. Check out the tips below for more info.

Now that you're off the ground, lets look at some handy tricks and tips that can make your debugging experience much better.

Chances are you'll be starting and stopping an application hundreds of times while you're debugging so any little shortcut can solve you tons of time in the long run. Keyboard shortcuts are huge, here are the four I use the most:

If you haven't figured this out already, WinDBG prints numbers in hex by default. That means 12 isn't the same as decimal 12. One quick tip is the .formats command. To use it is straightforward:

Where value is something you want to convert. So .formats will take whatever you provide and output it in a variety of formats:

Now we know 12 is actually 18 :). However, you can also provide decimal values using the 0n specifier:

There may be times where you need to calculate an offset or just do some basic math. WinDBG will evaluate expressions with the ? command:

These expressions can be as simple or as complicated as you'd like can contain all of the standard addressing that WinDBG uses:

...who needs calc.exe when you have WinDBG!

To make life easier, there are a number of extensions that people have created for WinDBG. These are great little tools that can be used within the debugger to provide functionality. Some are even built by Microsoft. The useful ones are !heap, !address, !dh, and !peb. I'll cover these and more in another blog post - So stay tuned!

Got any more tips or tricks? Share them in the comments below!

Email ThisBlogThis!Share to TwitterShare to FacebookShare to Pinterest
Labels: windbg