In this blog post we´re going to present a brief overview of the Open Cyber Security Framework Project.

Creating, Implementing and managing a Cybersecurity Framework has become a need (or may be a must) for many governments and organizations. The Open Cybersecurity Framework Project (OCSFP) is an open project dedicated to enabling organizations to conceive or improve a Cybersecurity Framework. All of the information in OCSFP are free and open to anyone. Everyone is invited to join and collaborate in order to improve all the content that would be available worldwide. It is licensed under the Creative Commons Attribution-ShareAlike 3.0 license, so you can copy, distribute and transmit the work, and you can adapt it, and use it commercially, but all provided that you attribute the work and if you alter, transform, or build upon this work, you may distribute the resulting work only under the same or similar license to this one. OCSFP is an OWASP Project since February 2014.

The main objective of the project is to provide a practical Cybersecurity strategy with a 1-2-3 practical phases as shown in the following figure: 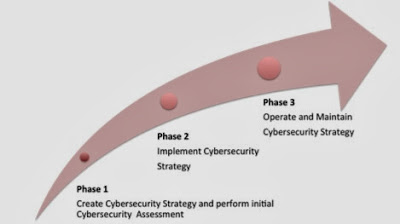 There´s a team of active contributors working on the core framework and there´s a very interesting roadmap of releases for this year 2014. Below is the list of open documents that are under development and will be released during the year. There´s an open mailing list to join for those interested in collaborate with OCSFP.

The OCSFP contributors are working hard on the first Framework Core release but there´s also under development open frameworks for different specific Industries like Healthcare, Government, Aeronautics, Telcos and Critical Infrastructure. The first version of all of them will be released during 2014.


For those who are just evaluating their current status on cybersecurity, there´s an quick online assessment with some simple questions about the current Information Security Programs and about the implemented technologies. With the first release of the framework core, a complete assessment will be available online with a table of recommendations for the first steps developing a cybersecurity strategy taking into account your current maturity level.

Some of the available questions in the current online draft are:

When you go deeper into the framework you will notice that after the 3 phase strategy there are is a set of activities to be implemented in the cybersecurity strategy:

Last but not least, the project has created a matrix mapping for the controls of SANS Top 20, NIST Cybersecurity Framework and Federal Communications Commission with OCSFP and some other well-known market frameworks are being mapped into OCSFP activities too:

The first release of the framework core will be released at the end of next month and will be available worldwide in order to improve faster on the security posture of organisations and governments.

Posted by Unknown at 8:41 AM No comments:

Anyone who has done lots of port scanning over the internet will know that Nmap often identifies certain ports as filtered. In this blog post, we'll look at alternative scans that can help truly identify the state of a particular port.

Before we continue, let's just hit on what filtered actually is. Nmap's man page gives us details:

Filtered means that a firewall, filter, or other network obstacle is blocking the port so that Nmap cannot tell whether it is open or closed.

And just for completeness, there is also open|filtered so let's just see that description:

Nmap reports the state combinations open|filtered and closed|filtered when it cannot determine which of the two states describe a port. The port table may also include software version details when version detection has been requested.

So let's say we've come up filtered, what can we do? Nmap has a few different types of scans and scan options that may help.

The Nmap Null scan (-sN) works by sending a TCP packet not having the RST, SYN or ACK bits set, which as per the TCP standard should result in a receiving packet with the RST packet set to try and reset the connection. Most firewalls will filter out these types of scans, but on occasion it can still yield results.

The format of the Null scan is:

A similar scan to the Null scan is the FIN scan, which sets just the FIN bit in a TCP packet. Like the Null scan this should also result in a response packet with the RST bit set if sent to an open port, while a closed or filtered port should simply drop the packet.

The format of the FIN scan is:

On certain older systems, a window scan can also be used to determine if a port is open or not. The window scan works by examining the window segment of a TCP packet with the RST bit set. A window scan will consider the port as open if the window value is positive, and closed if it is negative. This scan isn’t generally reliable as most systems will simply report as closed, but as a last resort scan type it may give some direction to investigate further. If a scan shows all open ports but a few as filtered, they may actually be open.

The format of the Window scan is:

Another technique that can be used with Nmap is to scan very, very slowly. Using the –T parameter with Nmap, which allows you to specify the frequency with which Nmap sends packets probing for open ports. Nmap has 3 settings that are slower than just a normal scan, named paranoid, sneaky and polite. The main differences between these are the time Nmap waits between sending probes, with paranoid mode (-T0) waiting five minutes between sending each probe, and polite mode (-T2) waiting 0.4 seconds.

Depending on the amount of hosts, ports and time available, different options will be suitable. Other parameters can also be passed to Nmap relating to how long Nmap should wait for a response, or how many times it should send a packet.

If I was scanning 100 hosts and checking the top 100 ports, a command like the following would be useful:

The -–max-retries option limits the amount of retransmissions Nmap sends, the -–max-rtt-timeout option ensures Nmap won’t wait too long for a port to respond and the -–host-timeout option ensures Nmap won’t waste time on hosts that are not responding at all. In the example above I set those options to a 2 seconds timeout for each port, 3 retransmissions and to wait no more than 10 minutes per host.

Against certain firewalls and/or older types of hardware, these options or some variation can often yield an accurate open ports list. In rare cases none of these techniques will work and a syn/ack will be sent for each port, showing the port as open. In such cases more extensive manual testing to investigate the actual response being sent, and determine if there is actually a service listening or not.

The above techniques are primarily useful when you know a host is alive and need to retrieve an accurate list of open ports. What about in a situation where you are unsure if a host is alive or not because all ports are coming back as filtered and ICMP traffic is blocked? In such cases a firewall or IPS will still generally grant “normal” access to actual open ports.

The above scan types are still useful for this purpose, as if a port is genuinely open and listening the scan will indicate as such although it may be lost in the noise of other ports being falsely reported as open. To determine which hosts are actually alive, the port scan data can be processed to show any hosts with at least one open port which would indicate the host is alive.

The format is to run Nmap Auto Analyzer is:

The report generated by Nmap Auto Analyzer will show’s hosts us up if they have at least one port open as well as showing why the port is considered open based on the TCP traffic, which can be useful when sorting through scans that included many hosts.

Apache Struts is a free, open-source, MVC framework for creating elegant, modern Java web applications. It favors convention over configuration, is extensible using a plugin architecture, and ships with plugins to support REST, AJAX and JSON.

Would-be attackers target Apache Struts because of its popularity among web developers. A search for the term ‘struts’ on The National Vulnerability Database indicates that there were ten vulnerabilities related to Apache Struts in 2013 with seven of them rated as High. In addition, exploit code is in circulation in the wild and publicly available in attack frameworks such as Core Impact and Metasploit.

You can perform initial discovery using nmap by probing the IP address space specifically for TCP port 8080 which is the default port for a variety of applications such as Apache Tomcat Manager and JBoss. Use the following command:

This produces the output file 8080.txt which must then be parsed to produce a list of potential targets. Use the following command to parse:
Posted by Unknown at 8:27 AM No comments: